Conks And Fungi In Trees In San Antonio 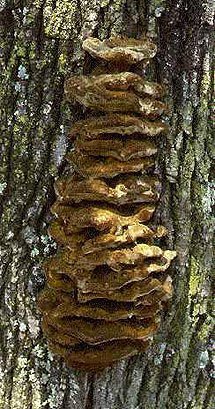 As a San Antonio resident or tree professional, it is important to be aware of the various types of disease which can affect the local tree population. Conks and fungi are two of the most common forms of these issues and conks are technically a type of fungus. In the San Antonio area, the majority of fungi seen on trees are either conks or oak wilt, which has been a serious problem throughout Texas for several years.

Oak Wilt: Understanding It
Oak wilt is actually considered to be one of the top tree diseases in the country in terms of destructiveness and its effect on oak trees within San Antonio and the rest of Central Texas has been classified as a tree epidemic. This infectious disease is caused by a particular fungus known as Ceratocytis fagacearum that will invade the water-conducting system of the tree before disabling it. The fungus responsible for oak wilt can affect any type of oaks, although some are more susceptible than others. Red oaks have the highest risk, followed by live oaks, and then white oaks.

Oak Wilt: Identifying It
The best method of identifying oak wilt will rely on a combination of several techniques, including examining the tree mortality patterns, foliar symptoms, and checking for fungal mats. Despite all of these indications, laboratory analysis can confirm whether a particular tree is affected by oak wilt. Typically a tree in San Antonio suffering from oak wilt will die within one to six months following venal necrosis, in which the leaves develop yellow veins that then turn brown. There is also defoliation depending on the type of oak tree affected.

Oak Wilt: Treating It
The methods for controlling and treating oak wilt in San Antonio are identical to those used across the country. Arborists begin by removing any infected oaks and then burning, burying, or chipping them in order to prevent the fungal mats from causing the disease to spread. In cases where it isn’t possible to completely remove the dead tree, experts will either inject herbicide or strip the bark that sits two to three feet on top of the soil line. If the oak wilt is discovered early on an oak tree, it can be beneficial to treat with Alamo fungicide containing the active ingredient propiconazole.

Fungal Conks: Understanding Them
As mentioned, the other main issue affecting trees in San Antonio is fungal conks. The conk, or bracket fungus, is technically the fruiting body of wood-rotting fungus and tends to be fibrous, although it can also be fleshy. The conks or fruiting bodies are the method by which the tree fungus reproduces and they typically develop on the stubs of old branches, cracks, or wounds within the bark from cold, heat, or windshake. The conks produce fungal spores which then spread.

Fungal Conks: Treating Them
The easiest way to treat a tree with conks is to remove the branch or portion of the tree that contains the conk. This also prevents the fungus from spreading to surrounding areas. If you are a homeowner with a conk-ridden tree near your home, an arborist may suggest you cut down the infected tree to prevent it from falling and damaging your property.