Mycorrhizae Benefits To Your Trees 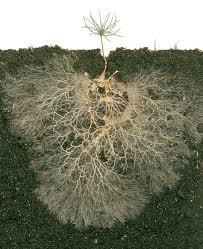 Fungi are a crucial part of a woodland’s ecosystem, as well as populated areas. So much of the activity of fungi occurs beneath the soil, people don’t generally even know about it, much less think about it or protect it. Even what we see, such as mushrooms and toadstools, for example, is a very minor portion of the main body of the fungus.

Soil in which trees are grown in populated areas, known as an urban forest, is different from what is found in a natural forest. Many factors make up this difference in soil composition, creating a hostile environment. Lack of adequate topsoil, temperature extremes, competition from grass, limited space for root expansion, compacted soil, and lack of mycorrhizae fungi are some of the factors that make for less-than-desirable growing conditions. It’s a wonder that our trees and plants grow as well as they do. Keeping the root system healthy is a major factor in growing and maintaining healthy trees. One way to do that is to increase the availability and amount of mycorrhizae fungi.

What is Mycorrhizae?
Mycorrhizae is a word from the Greek meaning “fungus roots.’ Even though you may have never heard of mycorrhizal before, it is crucial in the health of over 95 percent of all the plants the world over. They form very thin filaments that attach to the tree’s roots. This extends the roots significantly, helping them to absorb more of the soil’s nutrients and water.

Types of Mycorrhizae
There are two types of mycorrhizae. One is endomycorrhizae, which penetrates the tree’s root cells, and is associated with 80 percent of plants, most herbaceous plants and deciduous trees. This type, also referred to as arbuscular, occurs in ash, walnut, cypress, maple, sycamore, some poplars, and some conifer trees. It also occurs on all agronomic crops, such as corn, sorghum, and grasses that are used as cover crops in tree nurseries.

Hardwood seedlings that are grown in fumigated soil may not have a strong endomycorrhizal fungus network. The fungus doesn’t have the ability to quickly recolonize the depleted soil. Therefore, these seedlings may not grow properly in the nursery.

The other is ectomycorrhizae occurs with five to seven percent of plants. Most evergreen trees form a bond with this type. This type surrounds the tree’s roots rather than penetrating them. Trees that utilize this type of mycorrhizae include hickory, alder, beech, oak, fir, pine, spruce, and eucalyptus. There are some kinds of trees that develop both types of mycorrhizae. In both kinds there is cell-to-cell contact facilitating the transfer of nutrients.

The ectomycorrhizal fungus known as thelephora terrestris is a very common, naturally occurring fungus in US bareroot seedling nurseries. It is well adapted to the precise growing conditions in nursery beds, but not too many reforestation sites.

Benefits of Mycorrhizae
A tree or plant with a sizeable and well-established mycorrhizal fungus root system will hold up better during drought or during transplant than one without. Trees that are planted in areas that are not their usual habitat will be significantly benefitted if mycorrhizal fungi are added when the tree is planted.

A tree with a good mycorrhizal fungus root system will be able to reduce water usage by 30 percent. A tree’s root system with mycorrhizae have more area to absorb the water. This aids in a tree being able to withstand drought conditions.

Tree roots with mycorrhizae have a much higher rate of survival because they are better able to absorb water and nutrients from the soil. The root system can absorb up to 80 percent of phosphorous from the soil. The fungus also supplies nitrogen to the roots from decayed organic matter in the soil. The fungus is able to hold these nutrients and then release them to the tree roots as needed. There are certain nutrients such as cellulose that tree roots cannot use unaided, but the mycorrhizae can release acids that break down those chemicals and transfer them to the tree’s roots. In areas where there is a concentration of heavy metal toxicity, the fungus can protect the tree’s roots from damage. Mycorrhizal fungi produce certain hormones that stimulates the growth of new root tips, aiding both the tree and the fungi.

Mycorrhizal fungi may stimulate the growth of fine roots, speed the tree’s growth, and lengthen the life of the root system. When the tree’s root system in extended due to its mycorrhizal extensions, the tree is healthier, more vigorous, and more able to handle stress. The tree’s immune system is boosted, making it more resistant to soil-borne root rot and other pathogens and parasites. Mycorrhizal fungi also aid the tree in its competition with surrounding turf grasses for nutrients and water.

Soil structure is improved when tree roots are combined with mycorrhizal filaments, which decreases erosion. This is particularly helpful in areas where excessive rain can wash away the topsoil, or where dry, windy conditions can blow away the topsoil.

It is possible to purchase mycorrhizae with which to inoculate your tree. It is best to contact a professional arborist to come analyze your tree’s needs, then do the treatment needed. Give us a call when you are ready to take this step.